Between automation that excludes humans, and artisans that work exclusively by hand, lies the area of “artisanal cyborgs”: hybrids of tradition and innovation that empower unalienated production. Big picture vision: Automation for the Artisanal Economy

Some of that is just new applications for standard tech: for example our project using AI to spot factory-made fakes. But the most important part are the “heritage algorithms”. MIT’s sustainability motto has been “atoms are local, bits are global”. We get it. But why should African artisans import French algorithms? Isn’t that how colonialism worked: black people supplied raw materials (atoms) and colonists extracted the exchange value (bits)? Enter the heritage algorithm.

Through interviews with artisans we learn about the math and computing ideas they are embedding in their crafts, and create an interface that makes those available as “heritage algorithms”.  For example, cornrow braiding in the US shows elegant fractal scaling patterns that combine both contemporary innovation and Africa’s fractal heritage. These can be developed as coding lessons as well as 3D printing products for urban salons:

Other artisans we work with are located in developing countries. Take for example Ghana’s tradition of logarithmic curves in adinkra symbols, as shown below. The simulations and cultural meanings can be found here. Learning to program simulations can upscale artisans skills, rather than the deskilling that usually accompanies automation. And simply providing a laser cutter is sufficient to then apply those simulations to all sorts of efforts. Here our partners at AfricanFuturist.org used the combination of simulation and laser cutter to launch a company creating matching adinkra shirts and masks for the pandemic. 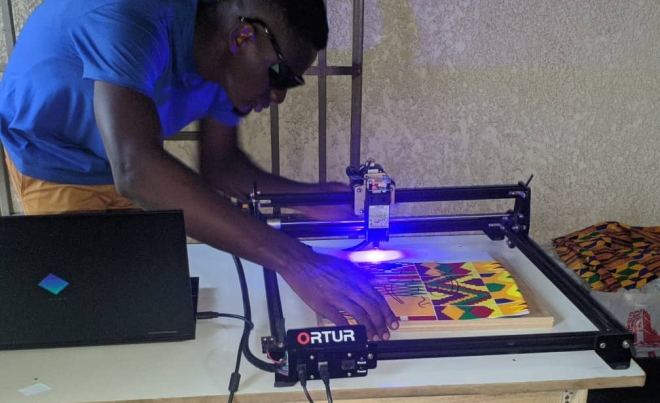 African designs also tend to create patterns that can be understood as radial or polar. That is to say, they are easily modeled using combinations of changing radius and changing angle:

Batik fabricators in Ghana use latex foam to carve out these shapes. However the latex does not decompose; so the trash heaps grow. As one cyborg alternative, we created 3D printed molds, and grew fungus-based foam (thank you Ecovative!) inside it. Lay artisans can use our blocks based cultural computing to create the designs that go into the 3D printer, increasing their skill sets, and improving sustainability with biodegradable stamps:

Unfortunately the fungus foam is not as porous. They had to dip it into the wax more frequently, and even then the transfer was not as complete.

Our new approach has been the development of a batikbot. While 3D printers are designed as cartesian coordinate systems, we decided to first try the African polar coordinate tradition for the batikbot hardware. This may allow some new efficiencies. In many cases it takes less energy to use a polar mechanical system to create polar designs, and less wear and tear on the mechanism (converting between linear and circular motion has plagued mechanical engineering in everything from steam engines to walking robots). But if efficiency is allowed to become the over-riding goal, humans will lose out. This is really about extending the pleasures, meanings and social ecologies embedded in artisanal labor through hybrid forms that maintain grassroots ownership, empowerment, and collaboration with nature.

UM undergrad Yuki Fang started with a simulation that was simple enough for lay users to manipulate, but open enough that they can gradually recode and adapt it as a source of their own innovation: https://csdt.org/projects/10110/run. Meanwhile, RPI undergrad Allen Liu created a hardware prototype. The wax is a little “gloppy” but a great start! 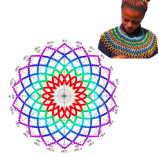 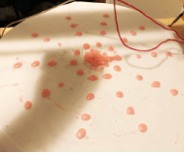 Once the prototype is revised, we will take it to Ghana. But we can also extend this system to incorporate innovation for locally grown organic dyes: https://generativejustice.org/solar-dye-in-ghana.

Another approach is to use laser cutting to create pressure templates. In the example below undergrads at Stamps school of Art and Design worked with Detroit artisans to create heritage algorithms from sources such as cornrow braiding patterns.  Then we laser cut a template and push fabric into the holes to create a dye resist pattern.

They also developed a technique for laser-cutting recycled wood using heritage algorithms, and dying the forms with plant-based colorants (either indigo or turmeric). The designs will go on sale soon at the African bead museum in Detroit, where we hope to transfer to technique from the high powered university lasers to lower powered versions that can be installed on site.